Matt and I had enough of the snow, cold and otherwise dreary days of February.  We needed OUT!  The perfect excuse came along just in time.

A client of ours needed photos of his horses in training at a farm in Ocala, FL.  Neither of his horses have begun to race yet and are just learning the ropes.  We decided to head down on Sam F. Davis Stakes day at Tampa Bay Downs.    It was going to be a whirlwind trip of us packing in a ton of stuff into one day!! It was a cold Florida morning but otherwise beautiful.  Our subjects came out for their morning gallop around the training track.  They are both beautiful horses and one of them is showing quite a bit of early promise as a race horse.  Of course you never know until they race...


The workers at AbraCadabra were exceptionally friendly and helpful to us.  I even found out that Frederico Mata, who was riding Volcat, was there.  He rode Ollie in Ollie's very first race and won!  He also rode Jaguar Hope many times!  Small world...

After getting our photos of the "kids at the farm" we headed down to Oldsmar, FL and Tampa Bay Downs!  I was excited about this part of the trip because Ollie's race trainer was there - Gerald Bennett.

First race and guess who had a winner!  I was floored!  It was all of Ollie's connections!  His breeder/owner and his trainer!  They won with their horse Arts and Leisure.

Ollie's breeder/owner, the Gilmore's, were not in Florida that day but I did get a chance to speak briefly with the Bennett's.  They had heard about Ollie (Hola C Bright) and me along with our odd connection to his namesake, the Sebrights.

They told me Ollie's barn name was "Chuckie" because he was crazy.  He climbed stall walls, broke Mary's finger (which is now permanently crooked) and was otherwise a terror at the track.   I told them that I felt he was a very fretful horse and worries all the time.   Mary totally agreed with my assessment and was happy to hear that he had a buddy in Toby.  Ollie needs a constant companion to settle him down and make him feel more secure.

I told them he was nothing like a "Chuckie" now.  He was friendly, sweet and a good "tryer",   albeit we have to go slowly and spell everything out in large letters and in crayon.   How could this sweet face be a "Chuckie?" 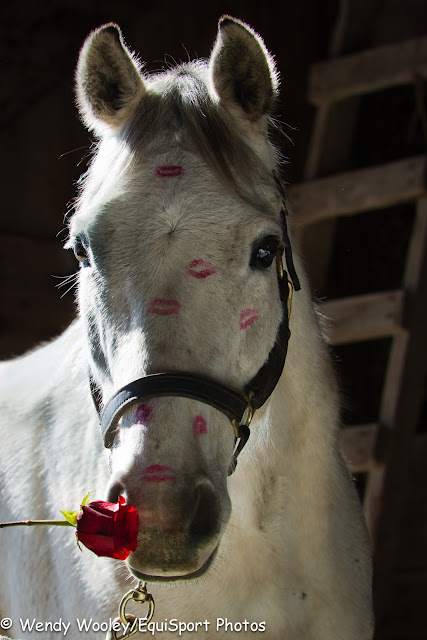 The Bennett's were happy to know Ollie is in a great place.   He's certainly not a horse for everyone because of his quirky personality.  Mary did mention they have another horse who is retiring from racing sound and needs a new career.  I don't know much about the horse but can find out if anyone is interested in knowing more.

Tampa was host to the Sam F. Davis Stakes later in the day along with 2 other stakes races on the turf.  The Sam F. Davis is considered a prep race for the Tampa Bay Derby which is a Kentucky Derby prep race.  Therefore, some Derby hopefuls came to show their stuff.   The favorite was Brethren who is a half brother (same dam) as last year's Kentucky Derby winner, Super Saver.


He won the race so easily that it seemed to be like a paid workout for him!  I was shooting the turn and by the time he came around to me, he was already well in the lead.

It was fun to get to see a possible Kentucky Derby horse up close.  Especially at a fun track such as Tampa Bay Downs.  Matt and I loved that track!  It's super sweet  - not too big, not too small - and the people are friendly and helpful.  We recommend it to everyone!

The following morning, we went to the backside of the track to meet up with a trainer for a horse that my blogging friend Ted Grevelis and his syndicate owns - Tabby Lane.

She's a sweet mare and trained by a super nice guy - Bernell Rhone.  Bernell spent a bunch of time with us as we watched Tabby Lane walk on the hot walker.  He mentioned that she's owned by an enthusiastic group of people who love to come back and visit her in her stall with their kids in tow.  He gets a charge out of owners loving their horses except that he has to play the part of "carrot police" because they give her too many!  Sounds like my kind of group!

Ironically, Bernell now trains an old horse friend/crush of mine - Independent George.  I had a horse crush on George while he was in training with Graham Motion.  George has a quirky personality and is a challenge to train.  He's like a small child all the time doing the exact opposite of what you are asking him to do.  Everything has to be George's idea too.  As you can imagine, he has a lot of "Go" in training and may "Whoa" in races.  He's aptly named (see video clip below) but I still adore him and his quirks!

Glad he's with Bernell Rhone!
Posted by Wendy at 11:28 AM