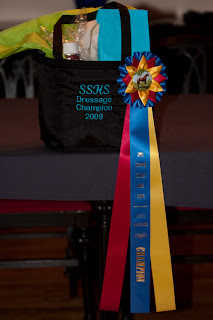 Toby and I did alright! We were the Intro level Champions for 2009. And we had to beat the seven year old twins to do it. Those twins sure are a ruthless couple of kids... ;)

Betsy invited international FEI judge Maryal Barnett up to Traverse City to give us a clinic. What a fantastic opportunity! I had big plans to ride Toby in the clinic. Toby had other ideas. He turned up three-legged-lame on Monday and the clinic was on Thursday. I wasn't about to take him even if he was feeling fine - which he was by Thursday. It seemed like he had a tendon injury in his front right so I didn't want to take any chances. And I couldn't take Hola yet because we've just begun him under saddle. We are just not ready yet.

So when life gives you lemons, make lemonade! I ended up riding one of Betsy's lesson horses. Meet my mount, Riot:

Riot is a 4 yr old Quarter Horse who is, believe it or not, a very mild mannered guy under saddle. He's a good combination of Toby and Hola and by riding him, I was able to work more on my seat and riding position. Which is exactly what Maryal did!

I took a lesson on Riot on each of the two days Maryal was there. By the second day, Maryal had me working on a killer "pelvic thrust" which she thoroughly embarrassed me by mentioning my boyfriend would be very happy if I perfected this... OH MY!

I did seem to improve my seat and get myself into a better position in the saddle. I was so happy with the improvement!

At any rate, the clinic was wonderful and I learned a ton. I hope to do more clinics and I hope most of all, that I can bring my rock star boy Hola C Bright next time!

The barn is surrounded by hunting property and all you can hear are the gun blasts all around the area. Therefore, even with the outstanding weather, the horses need to be kept in their stalls. I've been trying to get the boys some exercise and a pick of grass to keep their sanity. Toby seemed to have strained a tendon in his front right leg and turned out to be very lame yesterday. After much cold hosing, liniment and an itty bit of bute to make him a little more comfortable he's shown a bunch of improvement. He absolutely loves the attention.

I took Hola out to the sandy outdoor arena last evening before it got dark and let him stretch his legs. He squealed and wheeled and ran lap after lap after lap after lap after lap. I sat down on the mounting block and watched him let his "inner thoroughbred" out. I was so bummed I didn't have a camera because he put on a good show. However, it didn't help to slow him down today for his lesson.

Betsy earned every penny today. Hola had nothing on his mind but "go" today. His back was humped up to start and he had his nose in the air like a giraffe. Betsy yells out to me, "I think we may have to walk a really long time today until he decides to relax!" He was a total pill looking for any excuse to take off on her. But he never did. Good boy! Eventually the hump in the back relaxed and he began to listen to Betsy.

He was busy playing with the bit the entire time. It seemed he was on the verge of "chomping on the bit" to "go" but thankfully he kept it to "I'm playing and chatting with you through the bit." He was drooling the entire time.

He worked himself into a little bit of a sweat and spooked at anything he could find a couple times. But otherwise, under the circumstances, I thought he did really well. Eventually he became round although he did a lot of counter bending but Betsy is incredibly patient and positive so that he did improve ever so slightly.

I actually like that we had a difficult day with him because these kind of experiences are when the learning is the most. I think he did well under the conditions (in the stall too much, lots of energy, having to understand that he was at work and not play when under the saddle).

And in the meantime, I'm counting down the days till hunting season ends...
Posted by Wendy at 6:12 PM 5 comments:

My First Ride On Hola

It's been absolutely gorgeous around here lately. We didn't have much of an October but November has been a knock out beautiful month. So I had the itch to ride Hola...

Last night. I went out to the barn straight after work so I could beat the girl who feeds and cleans and get my ride in on both Toby and Hola. As it turned out, I had a good but not stupendous ride on the ever opinionated Toby. He just gets too much enjoyment at trying to get away with as much as he can all the time. It's a game. But really he was fairly good for not being worked for a week or so.

As I rode Toby, the barn owner and her son were there cleaning stalls and then another boarder arrived. Turns out she was going to take a lesson in the next 1/2 hour. I had it in my mind that I was going to ride Hola that night and nothing was going to stop me. So I had to hurry to get the ride in before her lesson.

I quickly switched horses and took Hola into the indoor arena. All the lights were on and it was dark outside so the indoor arena had a different look to him. He eyeballed everything but was really quite calm and good.

WHAT A WALK!! I was blown away at how it felt. He uses his hind end so well that even at the walk he was pushing me out of the saddle. Amazing! It covers so much ground and he wasn't being asked for it. I can't imagine what it'd be like if I asked him for more walk.

He has a narrow chest and a round barrel which I fit in perfectly (IMO). He was a wiggle worm just like a very green horse would be so straight wasn't anything he could do well at this time.

After we walked for a good bit in both direction I asked for the trot. WHAT A TROT!!! It's so floaty and easy to ride. Incredibly comfortable and it covers a ton of ground with minimal effort. He just marched around like a good little worker bee.

He can easily become tense but he relaxes quickly if you "coo" to him. So I sang softly the whole time. His ears flick back and forth and you can feel his muscles relax underneath you. That's when he will give you what you want... the roundness! And boy did he get round and floaty!! I was in awe and kept looking in the mirrors at us. He was gorgeous! Another horse came into the arena and he made himself even more round because at this point he was trying to impress the "girl horse." But he never lost step and kept on working. I love that about thoroughbreds. They are such good workers and enjoy having a job.

I kept the ride short and positive. He was just so good! And I was on cloud nine...

I cannot believe how lucky I am to have this guy. He's perfect!
Posted by Wendy at 5:05 PM 4 comments:

Nothing But Great Weather

I've been in a busy stretch lately with not much time to ride my horses. They are both enjoying the wonderful weather we've been having recently. Hopefully, soon I'll have more to write about than the weather...

I've been away for bit on a mini vacation and I got to see Barbaro's 2 yr old full brother, Lentenor, run in his first race - Lentenor at Keeneland

Needless to say, I had a blast.

But that meant Toby and Hola had a mini vacation as well. Hola hadn't been worked in 2 weeks due to his sore back leg then my mini vacation! Now that he's in excellent health -poops and all - meant he was going to be put to work today. This was only the third time he's had a rider and the second time that Betsy has trotted him around. Needless to say, I'm a proud mom.

I do have a Canoodler update. Seems he has found a new career in fox hunting where he will be fortunate enough to spend his winters in Georgia. What a lucky guy!
Posted by Wendy at 4:35 PM 6 comments: