May we all share in the Spirit of Giving.... 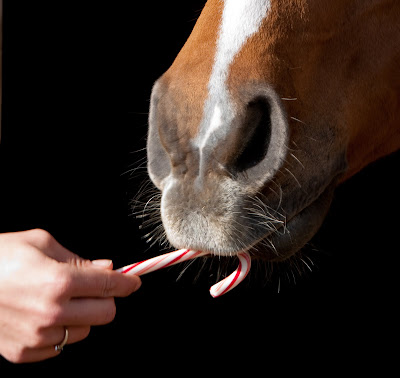 Tuesday and both boys got some work in. Last week my farrier came out to pull Toby's shoes since we are under a 2 foot blanket of snow which will probably be around for the rest of winter. I asked my farrier to "clean up" his feet after his shoes were pulled. He ended up trimming him a little bit too short and it made Toby ouchy. That was last Wednesday.

On Tuesday, Toby was still showing some signs of being a little ouchy but it forced him to put more weight on his hind end. In fact, I had one of my best rides with him. He was compliant, round almost directly from the start and when we practiced our "halt at X" he didn't have the last word about it like he usually likes to do. We had a fabulous ride!

Betsy rode Hola who was also moving like he was on egg shells. Yes, he was trimmed up a little bit too... But he was a rock star too! I sound so repetitive lately but he is giving his best and once he understands what he's being asked to do he's all about showing off the move. Knock on wood he still hasn't protested when he becomes confused. He just keeps trying.

After their work, both got some soaked rice bran (which they both love) and were turned out for a gorgeous day in the sun and snow. Now they will get some time off as I head to Detroit for Christmas and to Lexington for New Years with the boyfriend. He was recently here to experience the season in northern Michigan. It was a bit of a temperture shock for a Kentucky boy... But you gotta love a guy who actually wants to go shoot photos of sleigh rides through the woods.

And he shot this adorable photo of the local brownie troop who stopped in front of my house singing Christmas Carols:

Sometimes I believe I live in Mayberry...
Posted by Wendy at 9:06 AM 2 comments:

Last week's lesson was fun. I had a friend around to shoot photos while both my boys went through their drills. I rode Toby and Betsy got on Hola.

Toby takes a bit of time to get warmed up but once he gets going he does a nice job for an older guy. 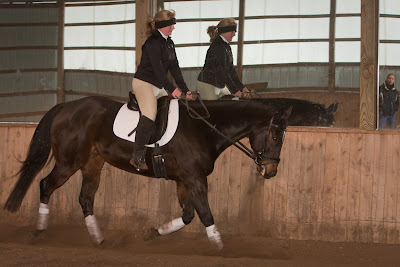 I got my new saddle back from repairs and I needed to change the stirrup leathers to be a little shorter. Of course my ego got in the way and I didn't do it because I want to stretch my legs as long as I can make them when I ride. So, in most of the pics I'm reaching for the stirrups. That'll teach me to ignore my ego and go with good sense. But one day (sigh!) I will be able to stretch my legs down farther and not fall apart. 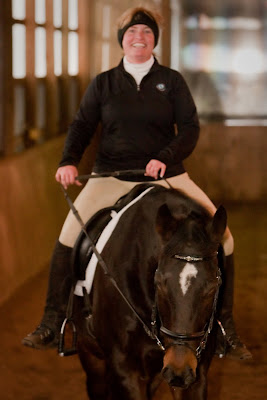 Hola started out a little questionable. He had his nose way up in the air and his mantra was "I have a need for speed." But he came around, got round and for the first time made a circle to the right perfectly! Betsy was so proud of him. Of course, I was too...

Starting out (I love his reach and toe point action): 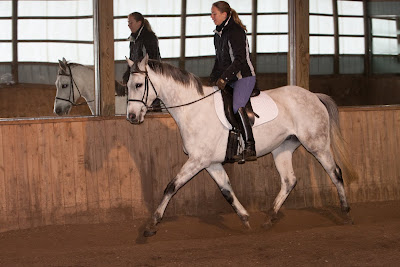 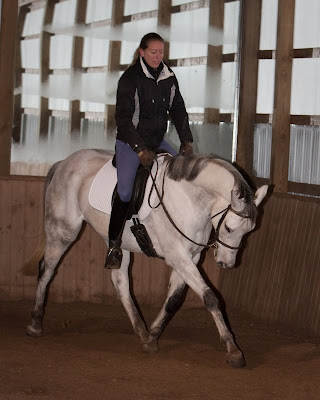 So proud of his genius! 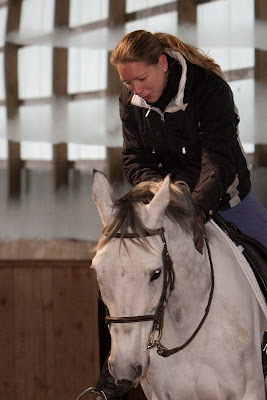 Hola is such a trainable guy. He wants to please so badly. I love that he becomes round without much asking and maintains it. Unlike Toby (aka grumpy old man) who seems to have that need to let me know he's really in charge and ALWAYS puts up a little fight about it when we discuss his roundness... What a personality he has.
Posted by Wendy at 10:39 AM 2 comments:

Tough Day To Be a Horse Blanket

My mistake completely.
I went out to the paddock to take pictures. Since the sun was shining brilliantly after weeks of overcast sky, and it was relatively warm (30's), I thought it'd be nice if I took off my boys blankets to get some photos.
So Hola came up to me first and i started to unbuckle the turnout sheet and pull it off. One of the buckles got stuck on the liner and Hola trotted off, dragging his turnout by his liner which he was still wearing. Of course this got him a little excited. The turnout came loose and fell and Hola stopped but then the liner started to roll over. He, of course, stepped on it, ripped it and ran around again.
Toby, the leader of the gelding paddock, was beside himself because in his mind none of this was right. If he could talk he would have been yelling "This is not right! Not right at all!!" Everytime Hola would move and drag his liner, Toby would have a fit: 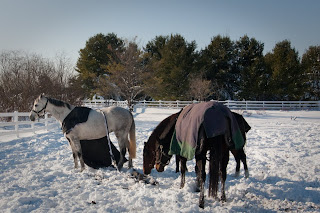 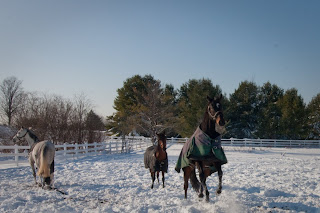 Of course that got Hola going again...

Eventually I got it off of him. No harm except to my pocket book. Again - MY MISTAKE!!

In the meantime, I had to get the Turnout Sheet Toy away from another one of the boys trying to have fun in the snow: 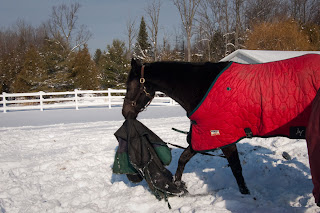 The guys totally had my number today.
And these two just wanted me to take pics of their cute morgan mugs as they followed behind me where ever I went: 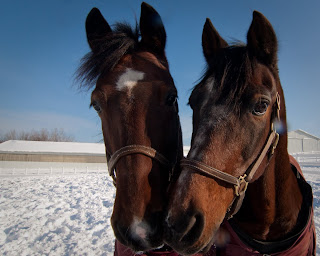 But I will always make time for my boys! Therefore, yesterday was lesson day for both Toby and Hola. It was the first time since my clinic lesson that I rode with Betsy. So I was focusing on the items I was working on with Maryal (sitting back on my seatbone, using my core muscles better, etc.) I think I've improved my riding position quite a bit. I kept myself back in the saddle which amazingly helps Toby to balance himself through the corners of the indoor arena. Toby is so long which makes me feel like I'm driving a big old Cadillac around. The first part of the lesson had me sweating boatloads because I had to work so hard to keep Toby moving forward. Then eventually he met me half way and our ride went so much better! Amazing how that happens. At any rate, for the first time in a long time, I had Toby steaming after a lesson and I've improved my seat and body position a ton. Betsy seemed very happy with both of us!

Then Betsy got on Hola. I had told her I was having problems getting him to stand at the mounting block. I know, you I can hear you guys thinking "oh he's walking away as soon as you try to mount"... well no. That's not it at all! He'll stand there, pretty as can be UNTIL you put your foot in the stirrup and then he goes in reverse. So Betsy worked on him getting "reverse" out of his system. The minute he tried to go backwards, she would force him forward and make him walk around the mounting block. After awhile, he finally stood still while she got on but it took a good long time. So it's my job to work on this with him. Seems easy enough to do.

Once Betsy got on Hola, he ended up being spooked by the frost on the mirrors in the arena. So Betsy let him sniff out the scentless horse through the frost and he settled down. You just never know what's going to get his heart racing. Betsy couldn't believe how much his heart was pounding! Silly guy. But if you let him check it out, then that's the end of his antics. He's ready to go to work! I love that about him...

In Hola's last lesson, he showed us that he drops his right shoulder big time when he is going to the right. Well I'm happy to report that he remembered his previous lesson and, in dramatic fashion, was easily corrected. With just a minor touch of the inside leg to ask him to pick up his shoulder, Hola would pick up the shoulder and FLING his legs to the outside with incredible flair. It's funny to watch.

Hola tries so hard to please us. So far, our patience with him has paid off big time. I don't think most people would have been so patient with him. We have and it's paying us big dividends now. He has great trust with us. Knock on wood, he hasn't once reared or bucked when he's gotten frustrated by what we were asking of him. And when he's marching along in the arena, he puts himself into a lovely frame with out much asking. He seems happiest when we don't bother his mouth too much so when he's round, floaty and balanced Betsy leaves him alone - and away he goes looking gorgeous! It's been so much fun to work with him.

And I just love his childish behavior although his turnout pals don't seem to...

I hope that everyone had a wonderful Thanksgiving! I was lucky enough to have spent the long weekend in Lexington, Kentucky. And had the opportunity to shoot some great races at Churchill Downs as well as see my first Fox Hunt! It was fantastic!
And for those camera buffs out there, I got to shoot with a really cool lens - a canon 500mm... 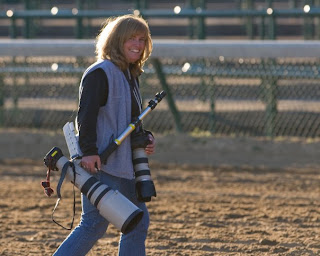 As you can see, it's about as big as me.

But now I'm back home in northern Michigan and taking care of my boys - Toby and Hola. Betsy came out to give Hola a work. He hadn't been ridden in a week and was on his toes for Betsy. She walked and walked him until he settled down and relaxed. Then she went to work.

Hola has a tendency to drop his right shoulder when travelling to the right. Since he doesn't understand many aids yet, Betsy worked on getting him to figure out that her inside leg pressure will cease when he doesn't drop his shoulder and is balanced. She worked and worked on it until it clicked with him. Then he proceeded to behave like a dog that has just learned a new trick. He wanted to show everyone his new fancy trick.

One thing I've noticed about Hola during this retraining process is how much he thinks about things. The entire time Betsy was working with him, his ears were flicking back and forth and he was constantly chewing the bit and creating huge foam balls that were falling from his mouth. He seems to enjoy the intellectual challenges we are giving him. The best is seeing how hard he is trying and the triumph when he figures it out. He just seems to bust with pride.

Right now the retraining is going in baby steps but once we get a good foundation down for him, he should move along fairly well. Now if we could only get him to relax right away and not jump to the conclusion that because there is a rider on his back that he needs to go fast...