Yesterday was an absolutely gorgeous day. I took the day off from work using one of my comp days from working 3 weekends in a row and had my camera in my hand. Betsy was coming out to give me a lesson later in the afternoon and I hadn't seen my riding friends in a while who also take lessons with Betsy so I went out to watch their lessons.

It was actually rather cool for a late June afternoon with the highs only in the low 60's but it was perfect for riding! No bugs, beautiful warm sunshine and the biggest horse show of the year coming up next week. My friends will be competing at Horse Shows By The Bay so they were going over their tests and they looked great! I'm so bummed that I cannot be there even just to watch. But my spirit will be there for them.

Betsy will be riding Heather's horse, Lily in Level 1 Test 1. Lily is a saddlebred/Quarter horse cross and she's doing very well. Everyone loves her and her unflappable attitude.

She's really come a long way with Betsy and I hope they will do well.

Her breeding isn't at all for dressage but what I love best about dressage is that most any breed can do it! It's done wonders to help Lily with her balance and movement.

The other competitor next week will be Thunder and Julia. Thunder is an interesting Cremello who is a morgan/quarter horse cross. Julia has worked with Betsy and has ridden him in all his training. In fact, I don't think anyone else has ever ridden him!

Julia's done a wonderful job with him and let's just say he's not easy...

The next guy to be worked by Betsy is Bolder. He's absolutely gorgeous but he has many quirks and because of his quirkiness, he's not cut out for the showing world. Lots of looks just not a lot of brains all the time. I just drool over him as does his owner and sometimes just having a gorgeous looking horse with a goofy personality is all you need. BTW - Bolder (now a gelding) is the sire of Thunder.

and today my photography was all about the gorgeous sky...

It was a postcard perfect day...

Then I had a lesson with Toby. I told Betsy how much fun I've been having with him and she was duly impressed! Especially with his canter and then his trot afterwards. He can move beautifully! Stretchy, springy, round. We laughed that he was ready for a show - he's light years better than he was last year. I wish I could get a video up for you guys but we didn't have it and I have yet to be able to photograph myself while riding... :) Let's just say that my lesson with Toby was the perfect ending to a perfect day.
Posted by Wendy at 9:24 AM 4 comments:

Clean as a Whistle

I'm back for about a week and then I'm off again to work the U.S. Women's Open Championship which will be held in Pittsburgh. This doesn't give me a whole lot of time to work my horses and progress with our riding.

I went out to check on Ollie and Toby, make sure they were up on their supplements and feed - I have to bag Ollie's feed (Kalm & EZ) since it's not what the barn normally feeds. I was curious to see how Ollie looked and if he was getting enough to eat. He looked like he lost a little weight so I'm upping the amount of feed. Feeding, I'm learning is never an exact science. Eyeballing your horses to see how they look and feel is, in my opinion, the best method. Toby looked great. He's got a nice shiny coat, dapples, good weight, good attitude. Both boys needed their feet done and now we can check that off the list of "things to do before I go again."

I'm a little disappointed that my new saddle has not yet arrived. I'm a real anxious annie about it...

But otherwise, I'm happy to see my boys and get my equine therapy. Not surprisingly, Ollie was a muddy mess so he was first on my list to tackle the dirt issue. I like to call these kinds of days the "My Pretty Pony" days. I bathed him, which he usually fusses over his hind end getting wet. He's a clever horse, he protests by swinging and kicking out with the opposite hind leg from the side that I am on. He's talking loud and clear to me that he doesn't like it in a threatening/non-threatening manner. It cracks me up. After he endures the bath, I always take my horses out for a pick of grass as a reward. Ollie is realizing that this isn't so bad. In fact, it's darn good.

Once he dried off, I felt like I needed to take pictures of him for all of you. June is a beautiful time of year in northern Michigan and all the wild flowers are blooming. I put Ollie out in Jag's old paddock. The barn owners father had spread out wild flower seeds in the paddock last year in honor of Jag. Last summer they didn't really bloom but this year they are beautiful. So I had to take pictures of my guy Ollie enjoying Jag's wildflowers...

Thinking About My Boys

I'm leaving today to head for the US Open which will consist of many long and stressful days. It'll be fun and BEAUTIFUL too (Pebble Beach isn't too shabby) but I will be spending my days doing course set-up in the early mornings and then hanging in the media center blogging the Rules of Golf. A big difference from riding my big lugs.

I've had a ton of delays getting out to California today which gives me more than ample time to contemplate where I am with my guys. Let's start with Toby.

I am having the time of my life riding him lately. He's forward, strong, a total team player - ok, most of the time he is...

It's a total charge to ride this!

Toby has his moments. Like he will just stop and refuse to go when I lead him out to the riding ring. 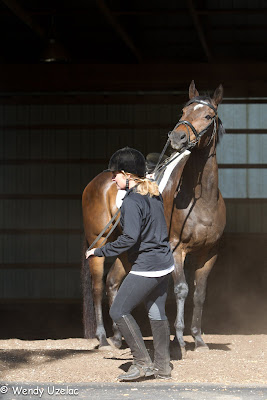 We have to have a good discussion first before he'll decide he wants to take part of the fun.

Then there's Ollie. We are light years away from where I am with Toby but he's fun in his own green way.

He's so cute and enthusiastic about anything

But he hates to make his jaw soft...

Eventually we get going and we communicate much better - it's just always a slow start...

and I just love riding him!

I'm hoping that he'll soon start to like it as much as I do. He's just not there yet

In all seriousness, he has a slightly tender spot on his back from my saddle. I just couldn't help myself and tried to pad him up a ton to make it work. It just doesn't. My new saddle has been postponed in its delivery because they had a leather that came in with a flaw. So by the time I get back from the US Open, I SHOULD be getting my new saddle that following week - just before I leave for the US Women's Open. Go figure. Oh well. His back will have plenty of time to rest and heal. He will have no excuses then...
Posted by Wendy at 5:30 PM 3 comments:

No Lesson But Still A Great Ride

It's that time of year where my world becomes busier than I like and I travel often for work. I'll be going all over the US in the next 52 days and I'll only be home for 18 of them.

So I worry about things like Ollie's retraining which will obviously be put on hold for a while and making sure Toby's feet are looked after because I must stay on top of that. I was very disappointed when I had to cancel this week's lesson due to some work conflicts. So I tried my best to work my boys without an educated eye watching us and telling me to sit back, be steady with the outside rein, praise him (I do praise them often), etc.

I rode Toby first. He's become very fun to ride lately. Especially after we have done some canter work. Something about the cantering gets his body warmed up and flexible.

Here we are just starting out with some trot work

I like that photo because I can see that I've lost weight (21 lbs so far).

My old guy was a rock star!

Then I got Ollie out for some work. He's a bit anxious in the beginning with his head up like a giraffe. Eventually he'll settle down and start to focus on the work. I didn't have the treeless saddle available so I had to use my old saddle and pad it up (3 pads!). It seemed to work fine but I can't wait for the new saddle to arrive.

I have some more pictures but I haven't gotten them up yet. They would be the "I'm a giraffe" shots which I really don't like to remember but it is part of the story. He just doesn't like to give his jaw to the bit at all when I ask. So I'm working on it and the second he does relax his jaw he's praised. It's not unlike how Toby began and look at how he is now!

Ollie got his "you're a good boy" pats and was cooled out.

The minute Ollie started to relax and work with me I let him know that he was being a rock star. He responded by giving me more and we marched around the arena in a beautiful frame with little to no fussing at all. I just kept telling him "Good boy Ollie! You're a rock star!" with a lot of inflection in my voice and patting him while leaving the bit in his mouth alone. He loves that and I start to relax which helps him too. Photos are good to see for my own benefit too!

I was so thrilled with both my boys. Hopefully we'll get through my busy months and pick up where we've left off here. It was such a good day.
Posted by Wendy at 6:52 AM 8 comments: