The Road To The Horse 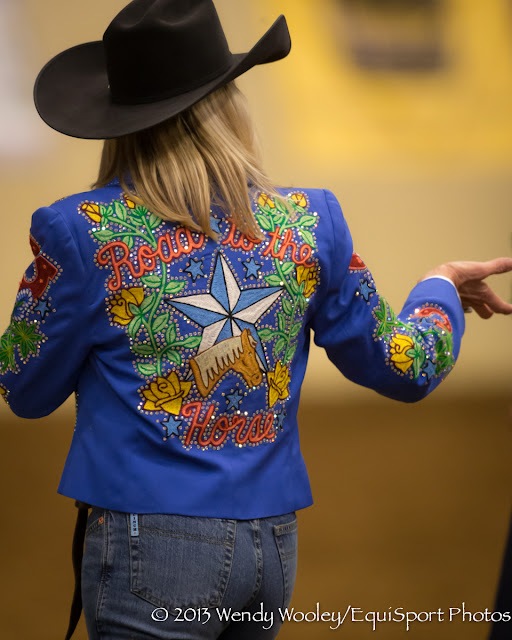 Yesterday was a soggy, rainy day.  I couldn't ride and we couldn't take photos...  or could we!   Thanks to Fran Jurga posting on Facebook about The Road To The Horse as well as another FB friend Marti McGinnis (owner of HappyArt), I felt the urge to go.  So I dragged Matt out to the Kentucky Horse Park.  He had no idea what this was all about.

We ran into a few friends and clients with their families.  It was going to turn into a fun filled afternoon!

The only trainer of the four in the competition that we were familiar with was Dan James of Double Dan Horsemanship.  We had met Dan James at the Steeplechase last year where he performed a demo.  I  had never seen anything like it!  He and his horses were incredible!  Here's a photo from his demo at the Steeplechase.

Here is Dan during the Road To The Horse...  His horse (everyone had an unbroke 3 yr old gelding) was difficult and probably needed a slower pace for learning things.  He gave a lot of double barrel kicks in protest.  Dan pretty much had to lead him through the entire obstacle course that he had written on his shirt so he wouldn't miss anything. 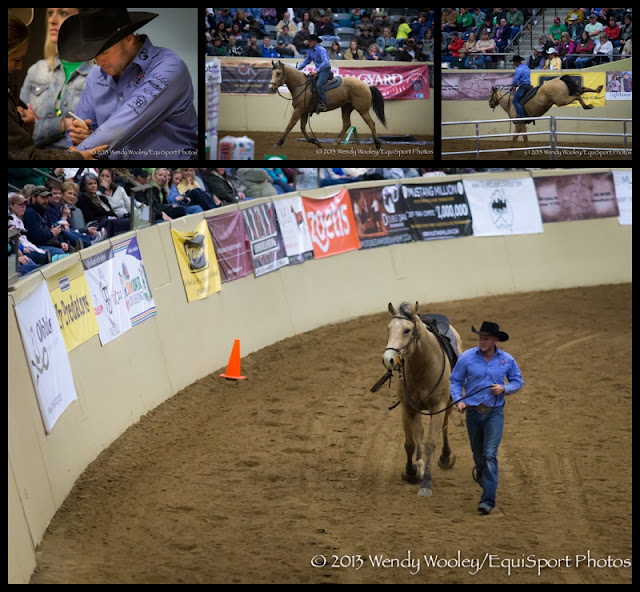 I soon learned the other trainers were amazing as well!

Probably the trainer with the most PR was Obbie Schlom.  Obbie is an 18 yr old girl with the wisdom of an 81 yr old horse trainer.  She's incredibly mature for her age and amazing in her talents as a trainer.  Watch her videos and friend her on facebook!  You just have to love a girl whose personal ride is a mule... 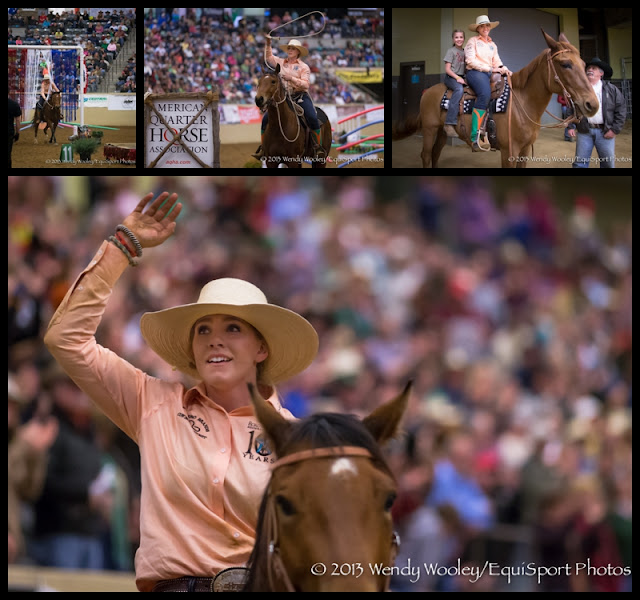 The other US competitor was Sarah Winters.  Some of you may be familiar with her Dad, Richard Winters.  He has a show on HRTV and offers his own horsemanship clinics as well.  Sarah was excellent!  I think I liked her training style the best although I have to say I liked all of them.  Her horse performed very well! 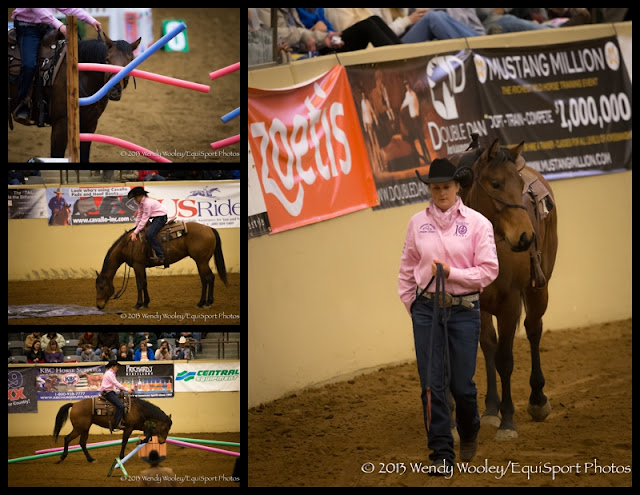 Her horse was such a curious thing and wanted to smell and eat most everything he came across during the obstacle course.  But he did everything except going up on the platform.  Also, she was the only trainer to ride using a halter instead of a bridle.

Lastly, was the eventual winner.  Guy McLean from Australia was amazing!  He was great with his horse, added a lot of humor for the audience and he built up his horse's confidence as the ride went on.  I loved it!  So did the crowd and the judges. 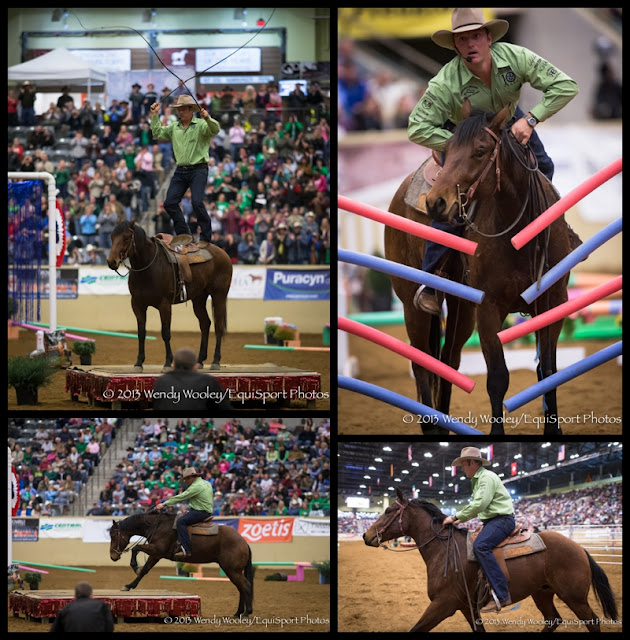 The order of finish for the competition was 1st place, Guy McLean; 2nd place Obbie Schlom; 3rd place, Sarah Winters; 4th place, Dan James.  But everyone was a winner, especially the horses and it was a treat for all of us in the audience to see such excellent horsemanship!

As a final note, and to end on a bit of equine humor...  please watch Guy McLean on his A.M.A.Z.I.N.G. horse Spinabbey  (the Seabiscuit part and the show jumping are my faves)... 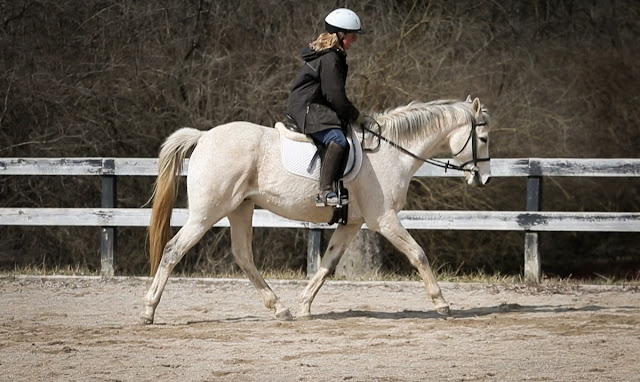 I bartered with Matt.  I'll video tape his golf swing if he video tapes me riding Ollie...  Ollie and I are still very green but we pretty much did nothing for most of 2012.  This is our last video at work as a reference.

Ollie's biggest issues are fidgeting a lot, keeping his focus on what we are doing and accepting contact with the reins.  We've only been working on moving in the gait that I've asked for (he likes to go up in gait) and keeping a round frame.  So here is a short video of us where I can see a lot of improvement and I can also see that we have a lot to do yet.

If anything, we're much more comfortable with each other!  I just love this guy so much.... 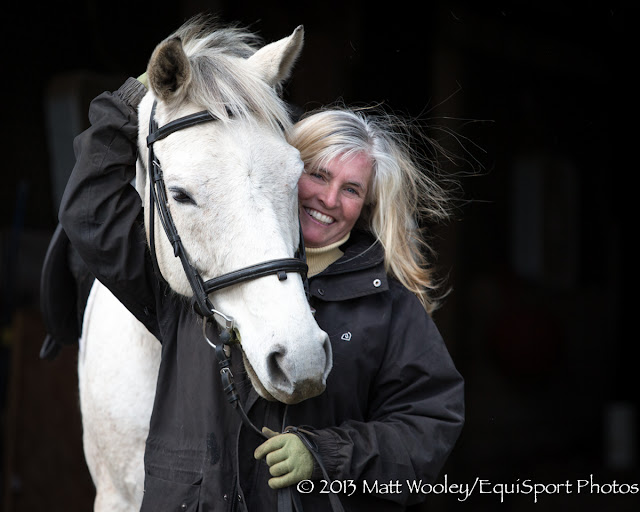 It's An Eventing World 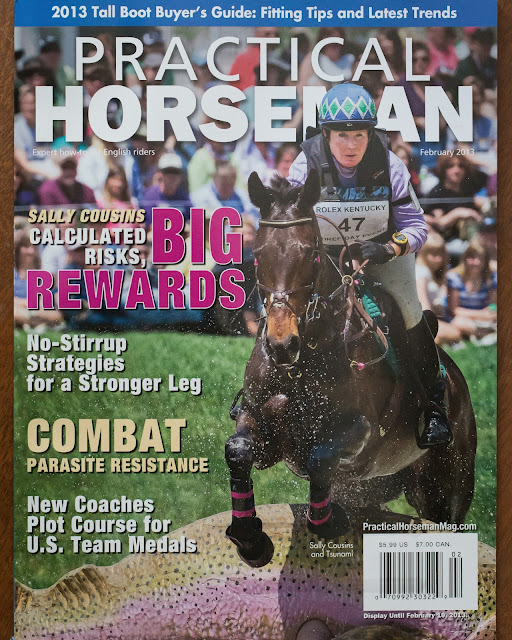 Ollie and I continue to progress and again I have no new photos or video.  Sorry about that!  He is holding a round frame longer and longer.  When he's all sassy he gets super round.  He can be such a pretty mover!   I know, I hear ya - video!  I will say that we don't always have perfect days.  One day our ride consisted of us going round and round in circles.  I'm trying to keep him at the gait I have asked him for.  He likes to go into trot before I ask for it.  So we circle until he walks again and we head into whatever direction we're facing at the time he decided to walk.  We must've looked silly but pretty much that's all we did for our ride.  On the flip side, our next ride was terrific!   I'm sure I'll have more days like that, especially with the grass greening up and giving him more sugar in his system.  I like the horse I have right now and I keep wishing the grass won't start growing again.  :)

Eventing is a big sport in central Kentucky.  So many people do it!  We have two public areas where riders can practice x-country jumps.  One is Masterson Station Park and the other is The Kentucky Horse Park.  So many of my friends take part in it.  Even my vet competes in eventing with her OTTB!

As you can imagine, many retired race horses are retrained in eventing.  They excel in the sport!  One of them is a horse I wrote about on a blog post a couple years ago, Sour. 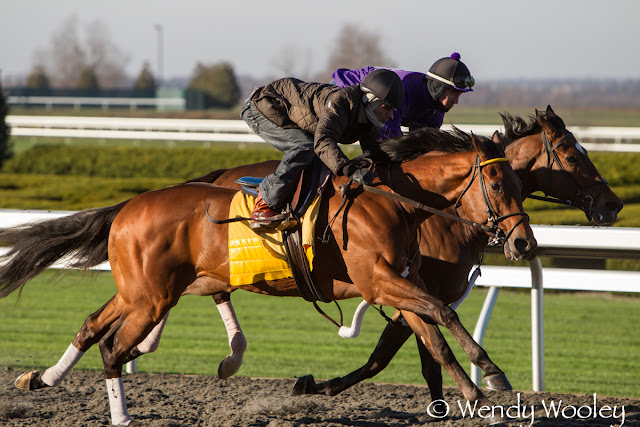 Sour was owned by Adele Dilschneider and she had him on the Kentucky Derby Trail.  You may remember her name as she co-owned Blame with Claiborne Farm.  I'll really refresh your memory with this photo - Blame is the only horse to have beaten Zenyatta...

At any rate, Sour wasn't competitive at the track at the higher levels of racing.  They didn't want him to go into the claiming ranks so he was retired from racing and put into an eventing home this past December.  His new owner found this blog and contacted me to tell me she had him now!  He's learning to be an eventer! 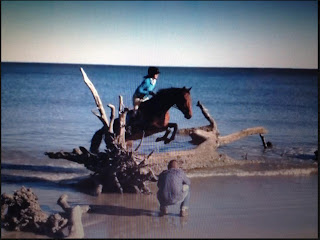 He's in South Carolina and seems to be having the good life there!  How much fun does that look!!  Jumping logs on the beach!  He's been renamed "Sur" because he's now a southern gentleman (and who wants to own a "sour" horse!). They hope to make the Thoroughbred Celebration Show in Virginia this year.  We can cheer him on there and many other shows!  I love that!


That's it for now.  I promise I'll get photos and video of me and Ollie soon!