Today I'm going to blog about a dog.  He's a special little dog to me.  I first met him when he came to the Lexington Humane Society with his buddy.   I thought he was the most adorable dog EVER.  The LHS tried to adopt him with his friend.  However, life got in the way and Gustas came down with an ailment and had to go to the quarantine area of the LHS.  While the two dogs were seperated, Jacie Mae found her forever home

Gustas came back to the adoption area and kept hoping to find his new home.  But no one fell in love with him.  Month after month, when I would go to photograph the animals at the LHS, I'd see Gustas there still waiting.  I made it a point to sneak him into my pet photography when I could. 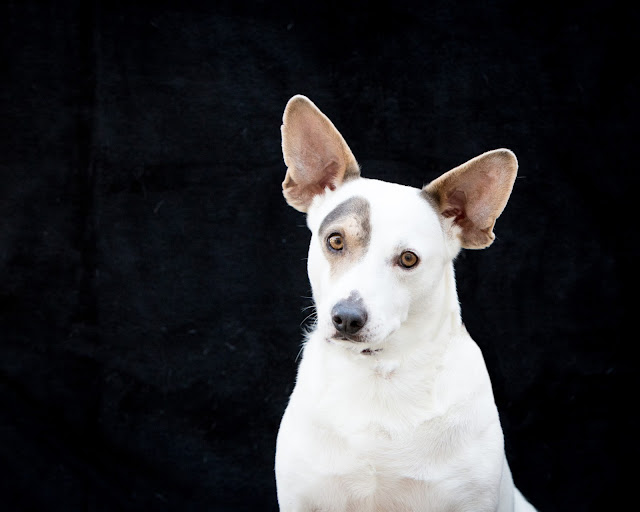 It's like he was made for the camera! Such an expressive face and those ears!  Those beautiful big ears!

Recently, I saw that Gustas continued to be looking for a home.   During the holidays, I'd post his photo on people's pages who I knew were looking at adoptable dogs online.  I felt so sneaky...  and hopeful at the same time.  Maybe one of them would take him home!  But of course nothing happened.

Finally, I had enough.  I called for a family meeting.   Matt, Amos, Monster (the cat) and of course me.  We talked for a long time about bringing in Gustas.  We made a list of things we'd need to work on.  Gustas, evidently, had been attacked by another dog while at the LHS.   He's a little gun shy about other dogs and protective of his hind end now.  We believed, and from our experience, that we could work it out between him and Amos.  It would be work for us but we felt it could be done.  Then we looked at our cat.  Monster is 12 yrs old.   He's very independent and he's not afraid of dogs.  He completely controls Amos who weighs 80lbs more than him!  However, Monster is a bit funny about who he approves and who he doesn't.  During the 2 yrs that my elderly frail feline lived with us, Monster would stay away from home except for an occasional visit.  Once my cat passed away, Monster felt he could come back home.  For good.   We do not want to change his feelings about it.  So we concluded that Gustas (or any dog or cat for that matter) could not come home to live with us with our current situation.

To make me feel better about it, Matt promised to help me with a dedicated photo shoot for Gustas.  It's my hope that getting more photos of him out to the public will help him find his forever home.  Below are some of the photos from our shoot: 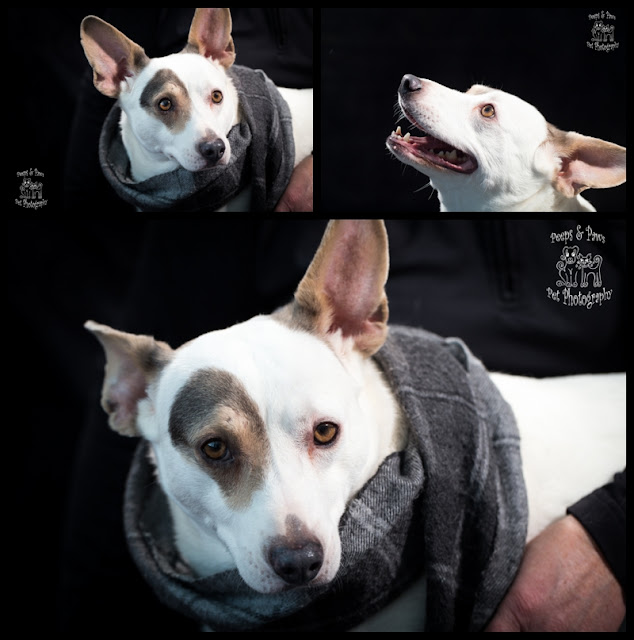 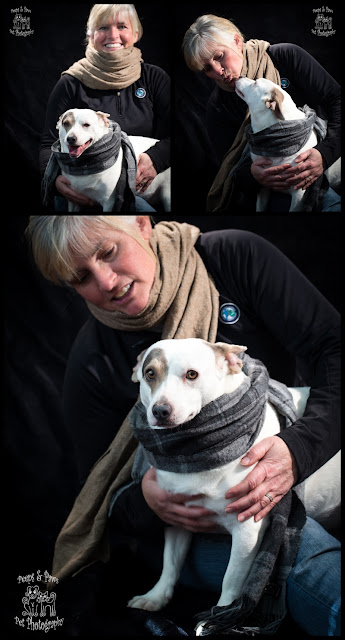 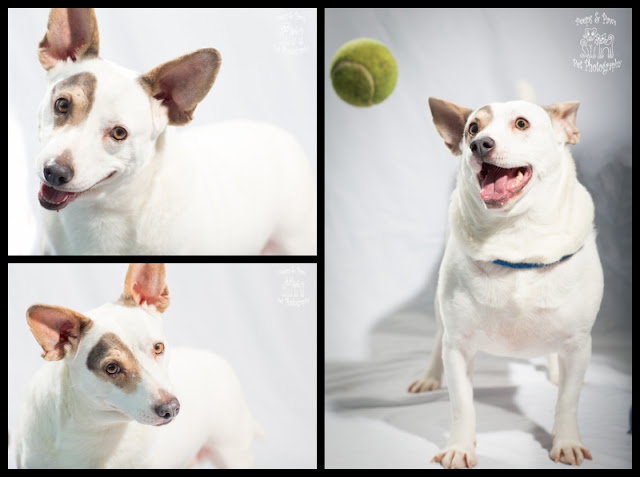 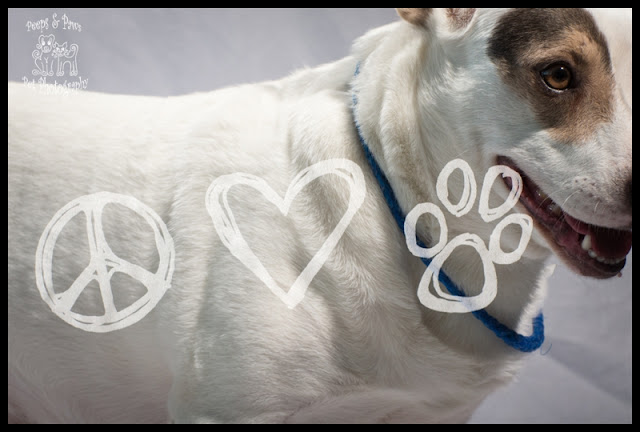 Finally, I want to ask you a favor.  Please share his information.  I made a cute video that can be shared (see below) or just share my blog post.  Either way, I would appreciate any help in finding this guy his forever home.  Thanks!

Be Patient And He Will Figure It Out 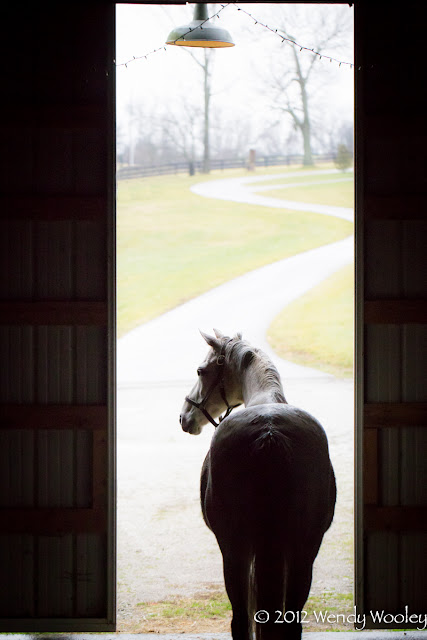 I'm so excited about Ollie!  I had a lesson with him over the weekend and he was a star.  I came home and couldn't stop babbling about it.  I love what we're doing!

It may sound very basic to all of you.  And it sounds basic to me.  In fact it's all things I already know.  But putting something into practice and reading about it are two entirely different things.

Our lesson began with me on Ollie and Ollie telling me that all he wants to do is trot. This is very typical behavior.  That's all fine and good except I wasn't asking him for trot.  There we are in the riding ring he knows well, with his best buddy hanging his head out the window watching us, everything around us is familiar and comforting to him.  He had no excuse for wanting to go fast.  He just felt he was in control and was going to dictate to me when we trot and when we walk.  This just isn't going to work out in the long run.

George, my instructor, had me take one rein and hold it on my thigh, causing Ollie to go into a small circle and we would hold that position until he walked and I immediately released the rein and we would walk off in whatever direction we were heading at that moment.  We did this every time Ollie decided he wanted to trot off.  I would alternate reins so our circles would always be different. Ollie caught on quickly...  I felt like I could see the wheels in his mind working it out, "If I trot, then the bit will hit the bars of my jaw and I go in an uncomfortable circle.  When I walk, that nuisance goes away.  I think I'll walk!"  The moment that walking became his idea was the moment of joy for me!  We did this so methodically, and without any drama or arguing.  It was like an "ah ha!" moment for me.  I can communicate with my horse!

Then we got to where I was asking Ollie for trot.  He'd move along just fine, then he'd get to a spot and speed up.  We did the same procedure as before but instead of getting him to walk, I was just getting him back to a nice working trot.

The best part of our lesson was working on his self carriage.  George told me that I need to get rid of the running martingale.  I told George I'm all about it!  I need to get rid of it if I ever want to go to a dressage show!  The problem is when Ollie throws his head up and takes the bit.  My martingale is very loose so it is only effective when Ollie is very head high.  Read:  it makes me feel better even though it's not doing anything 99% of the time...

At any rate, we worked on getting a round frame.  And boy did we succeed!   We would travel in a mini version of our arena with 2 long sides and 2 short sides.  As I traveled down the long sides, I would tip Ollie's nose to the outside with my outside rein but maintain our travel in a straight line with the inside rein.  When Ollie gave with his jaw, I immediately released the pressure from the reins and he would trot off in the most gorgeous fancy dressage horse frame.  I was peeing in my pants with excitement!  At first it was only a few strides, then he held it longer and longer.  George told me that soon enough he would be doing it all of the time.   I was exaggerating the release of the reins.  In time, it will be much more subtle.  George wants me to be very clear in what I'm asking Ollie to do at this point.

This is all so basic but I'm moving forward with Ollie and I'm thrilled!  George told me I could do everything in our lesson at the canter as well but he recommended that we work on his frame at the trot for now as he builds strength along his top line.