The Aliens Brought Him Back... Then Took Him Again

What is it about the little things that get me so excited?

As you know, Ollie has been doing well as a calm, settled recreational pony for me lately.  I figured the aliens had taken away the over-active, busy body horse I originally had.  But alas, the busy body came back the other morning.  SIGH...

I worked Ollie in the round pen fully tacked up.  I kept thinking to myself that today was going to be the day I get back on him and he'll behave like a normal horse.  He decided that he had a need for speed and sped around, bucking and tossing his head.  I was so disappointed.  He worked himself into a lather in no time at all.  He eventually went around nicely and in the end, he was following me around like a puppy dog.  I was pleased with how we ended but bummed about his need for speed when we started out.

I took him to the round pen again and we started out with walk/trot transitions.  He did them perfectly.  Then I asked him to canter.  No problem!  I felt that today was the day to get back on him.  What a nice horse!  He stood at the mounting block, he was actually a little lazy about going around the ring and not once did his hind end want to pass the front end!  I was thrilled.  I even went through the Introductory Dressage test with him (it's only walk/trot) and he went around very well!  He even halted perfectly square.  I wanted to do cartwheels.   I'm so excited because of his attitude.  He was calm, willing to work and not trying to out think me at any time.

The aliens still have my gray horse Ollie.  I really like the gray horse they left me.  He's so good!  I don't want to jinx it.  I was a little worried about how he'd be today when I worked him.  Matt and I had been gone for 6 days to photograph the Belmont Stakes so that was at least 6 days off for him.  But when I worked him, he was his same mellow self as the last time I worked him.  It makes me so excited and happy!   Today I took him into the round pen and he walked, trotted and cantered in both direction like a pretty pony on a carousel all on voice commands.  He seemed so proud of himself too.  I'm very vocal with him giving him praise and he lots of pats and scratches in his favorite places when we're done.  I also enjoy how he follows me like a dance partner in the round pen.  I walk, he walks.  I stop, he stops.  It's kinda fun!

Matt and I went to NYC last week and we turned it into a bit of a trip.  Our first stop was the Fair Hill Training Center in Maryland.  We visited with my friends at Herringswell and we even got to visit some cool horses.  Such as 2010 Breeders Cup Juvenile Champion, Pluck!

Pluck is taking a little vacation from training and is just being a horse.  He LOVES it!  We had a hard time getting him to pick up his head from grazing.  He's a chatterbox too.  He loves to talk to everyone and play. Such a kid!

Then Matt and I head to Belmont Park.  We had never been there and we were dumbfounded at the enormity of the track.  I believe its the largest track in the country at a mile and a half around.   It's beautiful too.  Just like a park! 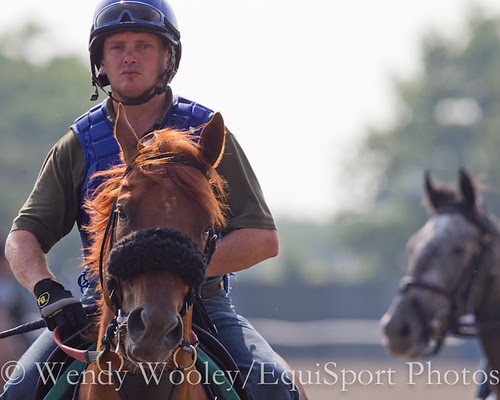 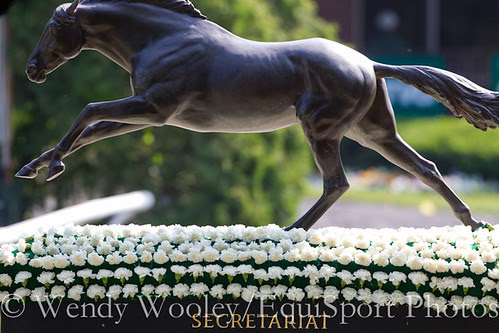 We shot some of the races on Friday and basically got a feel for the place.  Then Saturday was the big day.  And the weather was wet...


On Sunday, Matt and I decided to catch a race at Monmouth Park rather than drive all the way home.  The Monmouth Stakes was going to be run and one of our favorite horses was in the field - Get Stormy (aka "Clyde" because he looks like a Clydesdale).

What we didn't know, was that Monmouth Park was having their Irish Festival.  There were all sorts of Irish bands, food and stuff going on all day long.  At one point, several bagpipe bands came marching down the track but the most amusing of all was the horse/human race complete with grooms and a starting gate: 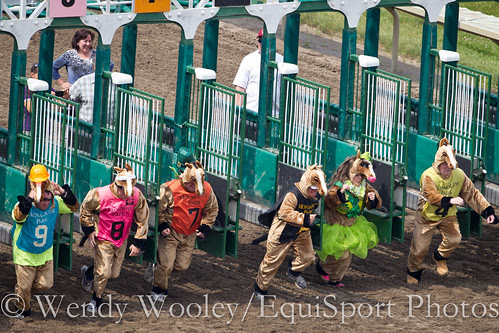 We had a blast! I highly recommend visiting Monmouth Park. It's a beautiful old track just a few blocks away from the ocean. I won't bore you with more photos so if you're interested in seeing photos from Monmouth then all you have to do is click here for a short slide show.
Posted by Wendy at 1:59 PM 4 comments: