They Had Other Ideas

I had planned on blogging tomorrow AFTER I had a lesson with both my guys. They had other ideas.

Toby came down with a cut on his right front knee and it's swollen up (no heat and he's not favoring it at all). He has arthritis in that knee so maybe he banged himself and it irritated his arthritis? I have no clue. All I know is that he enjoyed getting a cool bath today and I cleaned out the small cut and doctored it up. Toby loved the attention and I don't want to push the issue and make it worse.

Ollie seems to be a bit fussy about things. He's eating like there's no tomorrow but his poops are as loose as they've ever been. I'm afraid that the antibiotics I had him on last week paid a price to his stomach. He has the most sensitive tummy... I say this because when I put the new beautiful luxurious saddle on his back and tightened the girth he was not happy. Then when I got on him, he was very anxious and sensitive. Overly sensitive. So sensitive that he broke into a trot and then into a canter. He has a LOVELY canter it's just that I didn't ask for it... Once I got him to calm down a bit and got him to halt, I walked him a bit (pushing my luck) and halted him again and got off. Then I thought if he had so much energy that I'd try longeing him. Well he was a freak then too! So all I could figure is that he's in pain. Having a girth around your belly when it's sore is making him act silly. So I canceled the lesson with Betsy. I gave him a good dose of Cosequin's probiotics (which he loves), and I'm hoping his tummy heals up soon. He's still on Kalm N EZ which is a good feed for horses with ulcers and other tummy problems. He just needs some time for his stomach to heal. I gave him a cool bath too and he was very happy again. He's was following me around like a puppy dog so I know I'm doing something right!

Then there is Jag. Yep! Jag made an appearance today. Well not really but sorta. And I'm not 100% sure what he's up to but from what I can tell he has a little SOMETHING to do with the Disney movie which is about to be shot called "War Horse." So this is all I know, the artist that did the pastel of Jag, posted the following on Facebook:

Quite a day! Met in the morning by the Art Director from the Harry Potter films. One-on-one meeting with the guy who won an Oscar for his work on Avatar. Straight into a production meeting with some of the biggest names in the industry, with the work I've done so far being shown to Mr Steven Spielberg on Saturday! I'd say more but I had to sign a confidentiality agreement -ooh err missus! :0)

So of course I comment on her "status" with the profound words of "Way cool!" This is what Ali wrote in reply;

Wendy, cooler still is that the picture that the Avatar-Oscar-winning guy picked out to talk about first was the picture of Jag hanging on your wall :0)
Now that's WAY COOL!! Jag could be meeting Steven Spielberg on Saturday! Ok, I don't really know if he will or not because Ali can't tell me any more details but I'd like to think that he is. Jag is a rock star!

This is the pastel which Ali created of him for me and it hangs in my living room: 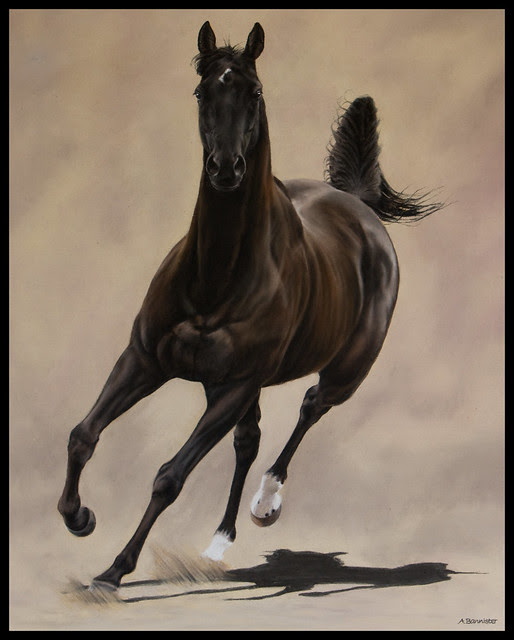